Worker-owned cooperatives gain immigrant women more than income. They give them a cure for the “tensions” that harm their physical and mental health. 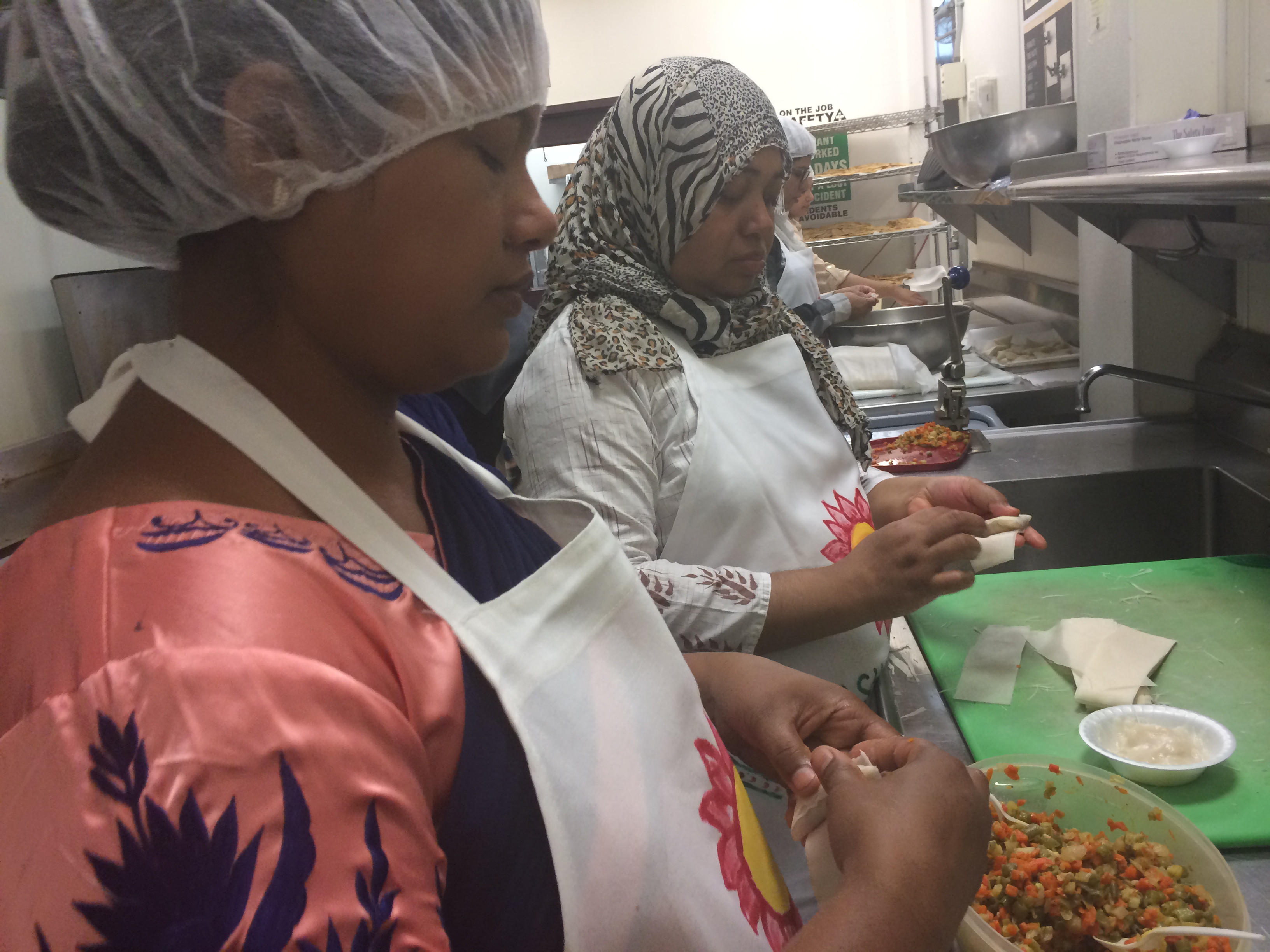 Sapna NYC’s row house office feels like a well-worn living room. Everywhere, there are welcome markers of comfort: plush couches, a stocked kitchen, photographs of smiling women on the walls. For the Bangladeshi women making their way in their new homeland in the North Bronx, this space is a vital support network, a second home.

Down in the basement, a tight circle of women commiserate over Asha Food Group, their recently formed workers’ cooperative that produces frozen samosas. Each worker is an owner of the business. Each contributes an even share of work, and gets an even cut of the profit.

The uncertainties involved in launching a new business loom over the six women in the group. It’s a familiar feeling, they say, this uncertainty. It reminds them of how they felt when they first arrived at the organization, soon after settling in the Bronx.

Farzana Boby has her Master’s in Islamic History from Dhaka University, but things are different now. “In Bangladesh we’re the ones who work with women of low-income backgrounds,” Boby says in Bengali. “Here, we’re the women they are working with.”

Jyoti Khatun nods and says, “In Bangladesh, I thought I was doing well. Here, I can’t speak, I need help with everything, going to the doctor, the train. Our main issue is speaking. We don’t know the language. We’re educated, but we can’t express it.”

“You start to feel very small,” says Saleha Parveen. “Mentally, when we first came here, we were pretty unhappy, feeling a lot of tension.”

Over the course of six months, the women began shedding that sense of isolation through their weekly participation in ASHA, a program designed to help women build financial assets, while sharing their struggles and desire for change.

“We wanted release from the tension,” says Boby. “We wanted to make good friends. We wanted to start our own business. For so many reasons we couldn’t work ourselves, our kids, our responsibilities. But as a group, we hope we can do something.”

She says “tension” in English in the middle of a sentence in Bengali. That English word is often used across South Asia to describe symptoms that sound like Western notions of depression; the term “depression” is reserved for extreme mental illness and psychotic disorders. Sapna NYC founder Alison Karasz, who is also a clinical psychiatrist, conducted participatory research among Bangladeshi immigrant women and collected critical information on their experiences with “tension,” which, she writes,“generally refers to a constellation of emotional and physical symptoms including sadness, worry, fatigue, weakness and pain.”

Dr. Karasz’s study involving interviews with 162 Bangladeshi women in the North Bronx uncovered that the women experienced distress for a variety of reasons: recent immigration to the U.S., marital problems, humiliation, a lack of independence, linguistic isolation, loss of social status, and underemployment. According the Dr. Karasz’s research, a majority of the women “reported incomes below poverty level (54.6%) with “surprisingly high rates” of known diabetes and hypertension.

The plethora of factors that contributed to women’s feeling of “tension” were considered common and a reality of life. Yet the notion of “tension” is akin to stress, unfettered from the stigma of a term like “depression.” For the women, “tension” is simply a part of being married, being an immigrant, being a woman, being a mother, and getting older.

“Women globally have high rates of depression, because of limited agency outside and inside the home. These dimensions shape their health and their self-care,” says Dr. Emily Mendenhall, author of Syndemic Suffering: Social Distress, Depression and Diabetes among Mexican Immigrant Women.

Mendenhall’s research explores what she calls the VIDDA syndemic, a clustering of diseases borne of social inequality: Violence, Immigration-related stress, Depression, Diabetes, Abuse. Similarly, her research in urban India explored stress and diabetes in individuals from varied socioeconomic groups. Many higher-income participants referred to “tension” as worry for their children’s future and family dynamics–and as a strong contributing factor for their diabetes. Those with lower-income reported experiencing depression with greater frequency, and simultaneously having limited access to health care, thus worsening the symptoms of their diabetes.

Syndemic, a portmanteau of synergy and epidemic, describes the intersection of diseases and social problems, for example how depression and diabetes co-exist and can be exacerbated by socio-economic conditions such as food deserts or lack of access to healthcare. “Feeling socially detached from mothers, sisters or friends from your country of origin is a predictor of depression,” says Dr. Mendenhall of immigrant women in the U.S. “For those who have already suffered interpersonal violence, displacement, war, or through the immigration experience, social and economic support provides a unique method of agency and confidence building.”

“When you really love what you do, to be a member of a coop, you feel free.”

Collectively run, worker-owned cooperatives are one such promising vehicle to incubate confidence, better physical health and agency among low-income immigrant and women of color. The Asha Food Group is a critical space for women experiencing depression to strengthen connections to their community, in addition to building their economic means. Their work allows them to shift from social isolation to interdependence.

Women in other worker-owned co-ops say they have had similar experiences. “When you really love what you do, to be a member of a coop, you feel free. You can manage your own schedule you know your responsibilities. There’s no one to tell you you might get fired,” says Luz Roma, owner-member of an eco-friendly cleaning cooperative in Oakland developed by the co-op incubator WAGES (Women’s Action to Gain Economic Security). Roma, who joined the co-op at age 20, recalls her colleagues’ horror stories from former workplaces. “Some of the members come from really bad experiences, especially in cleaning field, because of the products they were using,” she says. “And their boss would push them to work 7-10 houses for $60-$80 per day.”

Workplace and wage inequity has led to a rise in worker cooperatives throughout New York City. The Federation of Protestant Welfare agencies documented the existence of 23 worker cooperatives in NYC as of January 2014, in their report “Worker Cooperatives for NYC: A Vision for Addressing Inequality.” The economic need for income-enhancing projects like worker cooperatives is especially acute in the Bronx, which has a staggering 12.2% unemployment rate, double the national rate of 6.1% and almost twice New York’s rate of 6.6%.

The Bronx-based Bangladeshi women who come to Asha are recent émigrés who often fall in the gaps of employment and labor data, because they are either underemployed or work as stay-at-home mothers. The high levels of employment documented among “Asians” doesn’t encompass their particular experience.

To support the expansion of worker cooperatives and help low-income New Yorkers of color become business owners, the New York City Council approved $1.2 million in funding in June 2014 to support worker cooperatives across the city. Mayor Bill De Blasio even declared June 21 “Worker Cooperative Day.” As a recipient of a technical assistant grant from the City Council, Sapna NYC is now developing other cooperatives with women in their programs. Their goal is to empower women with financial assets to address other mental and physical health concerns.

“When the members of Asha are developing their products,” says Moumita Zaman, Director of Outreach and Advocacy at Sapna NYC, “they think about nutrition and health, how to use healthy ingredients, good cooking practices. They think about how they include each member, yet honor their roles and responsibilities at home.”

An intrinsic benefit to women-led worker cooperatives is that they’re a chance to re-imagine work. Their holistic approach to business is attuned to the mental, physical and environmental health of all members, and the community at large. Throughout the city, fellow co-op developers are working with members to build more empowering workplaces. Green Worker Cooperatives, another Bronx organization, develops green cooperatives, which, according to their mission, “don’t kill you, your community, or the earth.” Ginger Moon, one of their Coop Academy graduates, is a three-woman cooperative that provides food-doula services, nutritional in-house cooking for new and expecting mothers.

“After the birth of my son, I went through postpartum depression,” says Ginger Moon co-owner Janvieve Williams Comrie, “and even though i had a great birth, there were other issues. I’m an immigrant, and I didn’t have much family support.” Her future business partners, Alexandra Lopez Reitzes and Maricruz Badia, were recommended by friends to help Comrie through the difficulty. “They came they shared meals with me, helped me with what was going on. We recognized that we’d gone through similar experiences of feeling alone. So we decided to create a business to provide support and food to women that have just given birth.”

Ginger Moon buys produce from local farmers who uphold fair labor practices, use biodegradable containers and compost waste, thus approaching their collective labor as a green business. Says Comrie, “As we empower women to combat that isolation and ask for support, we also determine for ourselves how we do things. We can design, model and execute on our own terms. Our cooperative recognizes that we are individuals, that we have our own needs and family dynamics.”

Another important aspect of re-imagining work in worker-owned co-operatives is maintaining balance between self and collective. “A worker cooperative is not just about the coop, it’s about you,” says Roma. “Right now, I’m with them, I’m very happy to continue with them. If I move, then I’ll start again. It’s okay. You become not afraid to try something new, to start a new business.”

“Economic empowerment is absolutely key when we’re dealing with depression. Depression is about not living the life you want to, it’s a loss of social connection to others,” says Dr. Alisha Ali, Associate Professor of Applied Psychology at NYU. Dr. Ali also serves as advisory board member for the Project for the Advancement of Our Common Humanity. Her work with domestic violence survivors living in shelters includes economic empowerment through acquiring life skills the women have not had access to because of domestic violence, limitations in their ability to communicate or navigate their environment. “We bring in experts when we’re working with women on recovery from depression, to teach them how to open a bank account, write a resume or find clothes to wear to a job interview. We need that social connection, the feeling supported by a community,” says Dr. Ali.

Asha is the Bengali word for hope, and in its verb form, it also means “come.” There’s a sense of uplift and movement associated with the word, and collective members use it often to describe their aspirations for their burgeoning business. As Jyoti Khatun bids the group goodbye to pick her child up from school, she says, “We say, by walking, we can make the path. We’re hoping, we’re trying. We’ve found a path. We don’t feel as lonely anymore.”

Chopped: Four Sections
'All your potatoes on the ground—you were never meant for this. The camerawoman tiptoes around spilled tubers as she zooms in on your front teeth, tearing open a parcel of dried shrimp. '

Karma on the Half Shell
Buddhist "mercy releases" have long set animals free in ways that may harm them. Parks and animal protection organizations are working to make it better.