Three Chinese American women, who are very successful in their fields, are considered failures for one single reason — for staying single past the age of 25.

YiYi Liu, 31, is a marketing manager at a pharmaceutical marketing firm in Manhattan. Coco Lin is a 28-year old doctoral student at New York University. K.L. Lin, 38, no relation to Ping, works as a financial analyst for a Manhattan-based global investment bank.

Despite being successful in their chosen careers, these women are considered failures by their family, friends and the larger Chinese community for one single reason – for remaining unmarried.

According to Chinese tradition, women are expected to be married and to be raising their own respective families before they reach the age of 25. Those who remain single beyond that age, or 27, are considered incomplete women. The powerful, Chinese Communist Party-aligned All-China Women’s Federation has coined a term in 2007 to describe women in their late 20s who have remained single. They are called sheng nu, “or leftover women.”

“ While I was coming to the United States to pursue my dream of going to college, most of my girl friends in my town quit school and chose to start a family after middle school,” Liu, the marketing manager based in Manhattan, said. She migrated with her family to the United States when she was 15.

The social stigma of being labeled as a leftover woman, however, is felt not only by women in China. Women of Chinese heritage living elsewhere are not spared from the pressure and public shaming.

“Even within the Chinese immigrant community, the notion of getting married early still holds,” Liu said. “Most of my girl friends I went to school with at the International High School at La Guardia are married now and have children,” she added.

“I am the only remaining single now. I completely feel I am a leftover woman,” Liu said.

Her parents, she said, have been pressuring her to get married since she turned 25. “They learned about the term ‘leftover women’ from Chinese-language TV, and they feel ashamed for me for not being married. They have been trying to set up me up on dates.”

In Beijing, parents who are so worried over their unmarried children even go to “marriage markets” at a city park twice a week, bringing along resumes, photos and even a listing of physical attributes of their children. These parents hope to find a match for their child in the unmarried offspring of another concerned parent. Recently, more unmarried children are seen being dragged by their parents in these gatherings.

For her part, Coco Lin, who’s pursuing her Ph.D. at NYU, said being away from her parents in China does not give her a free pass from the pressure of marrying at a certain age.

“ My parents want me to get married by 30. They want me to look for a potential husband in my Ph.D program. Marrying a person from the same socioeconomic status is prevalent and preferred in Chinese culture,” she said.

Still, she said she feels she’s in a better place than most of her college classmates that she left behind in China. “Even though they have great careers, their parents, family member and their whole social network still considered them as incomplete women.”

Worse, Coco Lin said men in China are not too keen on dating leftover women. “They (Chinese men) have a preconceived impression that leftover women are high-maintenance.”

“It is not fair to call me a leftover woman. It sounds like I am a worthless product in the marketplace… I am an independent woman with a successful career, having a fairly good life. I am not a leftover woman. I am a valuable individual who contributes to society.”

She plans to stay in the U.S. after her studies to pursue a career in academia. However, she admitted that finding a husband is on top of her priority list. “ I don’t want to fail my parents’ expectation. In Chinese culture, obeying your parents is most important. I don’t want to get my parents disappointed in me if I don’t get married. Chinese parents believe marriage is an essential life mission.”

However, if ever she marries, she wants to do it with the man that she’s really in love with, rather than with someone who was picked by a matchmaker. Nor does she want to be married in a traditionally arranged marriage agreed upon by the parents of the bride and groom.

“I believe love is the basis of marriage. In a free society like the United States, I think Chinese women have the right to marry the person they love, rather than marry someone who meets their Chinese parents’ standards,” Coco Lin said.

K.L. Lin, the investment banker, is a second-generation of Chinese immigrant. She lives with her boyfriend, Michael, in a condo in Manhattan. They have no plans of getting married yet.

“Every time I see my parents in their Bayside house, the first thing that they tell me is always, ‘when are you going to get married with your boyfriend?’” she said. “They can’t even remember Michael’s name even though we’ve been together for over seven years.”

She said her parents do not approve of her relationship with Michael because he’s black. “They asked me to marry a Chinese guy because they want their in-laws to have the same background as theirs.”

After she graduated from college, her parents went as far as arranging dates for her. “It never worked out. Somehow, I did not click with Chinese men.”

A woman who is known as Auntie Lee in the Chinese American community runs a dating agency in Flushing. She said it is not unusual for mothers to bring pictures of their daughters to her office in the hope of finding a good catch for the daughter.

She recently helped a client, a 35 year-old heart surgeon from China, to find Mr. Right. “The mother was really worried about her daughter being a leftover woman, so she brought the daughter’s photo to me to help find her a husband,” Auntie Lee said.

Lee is a mother herself. Her daughter Lily, who was born in the United States, is 35 years old and single. Lee said she trusts and respects her daughter’s decision. “As a parent and as a matchmaker, I sincerely think marriage is not the only option in life. People should choose whatever lifestyle makes them the happiest.”

“ If you decide to get married, marry somebody you love. If you choose to remain single and be a leftover woman, be the happiest leftover woman in the world.” Lee said.

Liu the marketing manager said that although she values family life and would like to obey her parents, she would rather live her life the way she wants to. She said she would like to get married someday. But not right now.

“I am putting all that away because I want to focus on my career at this point of my life. I am loving my life as a leftover woman in New York,” she said.

Yichen Tu is an Open City Fellow who covers Flushing. A New York City-based freelance writer, documentarian, and amateur photographer, Yichen was a staff reporter for World Journal. She earned her Bachelor of Fine Arts in Film Studies at the National Taiwan University of Arts and Master of Arts in Urban Planning at Hunter College.

Lakshmi’s Night: A Muslim Woman Honors Diwali
I recall the monkey god’s gaze at the Ganapati Temple and my own impulsive desire to offer him a coconut.

Where South Asian Men Process Trauma
Men are standing side by side with women in the struggle
to stop domestic violence and toxic masculinity. 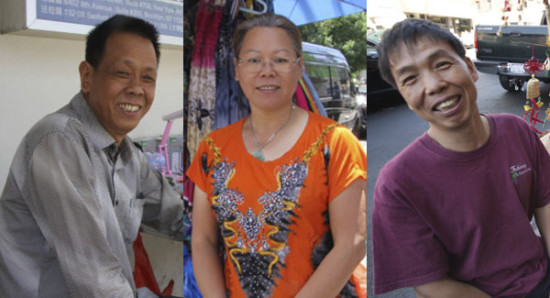 Giving up on the “American Dream”?
Three immigrant street vendors tell their stories -- their reasons for coming to America and their hopes and dreams.