Remaining unnoticed is not a new thing for Staten Island.

As the atmosphere settled, we saw clearly the devastation.

We had no power, we had no phones, we had no gas in what remained of our cars, our family and friends were missing, and our bridges were closed.

In the days following Super Storm Sandy, it became apparent that Staten Island was not getting any news coverage, and subsequently, not getting any help. Remaining unnoticed is not a new thing for this island, being obscure despite its geographic location. This time things were different; this time residents could not go the distance alone.

I cannot say for sure what compelled me out of my home. A sense of responsibility is difficult to justify, even though my family has been here for nearly 200 years. I feel indebted to this island for shaping me as a woman and a writer. I am pulled to its defense and protection by a dedication that could only be described as familial.

I went to the evacuation centers to get lists of supplies. I went to the neighborhoods to bring clothing, water, and food directly to the residents who had lost their homes and possessions. I sought out small pockets of bungalows along the East Coast of the island. I knew these areas, I knew that the people who lived there were not of means. I used what was left of my gas in desperate trips, leaving my house, which was serving as its own evacuation center for my family and friends. Working side-by-side with other Staten Islanders, I helped coordinate, organize, and distribute donations from around the nation. This continues today.

These photos were borne of the need to offer images with my social media cries for donations and volunteers. I have taken over 250 pictures of the East Shore of Staten Island starting the day after the storm and continuing even now. As this grew, it transformed itself into the most effective “image-maker” I know: poetry. Everything I write about this storm is dedicated to the residents of Staten Island and is for the sole purpose of giving their voices a space to be heard. 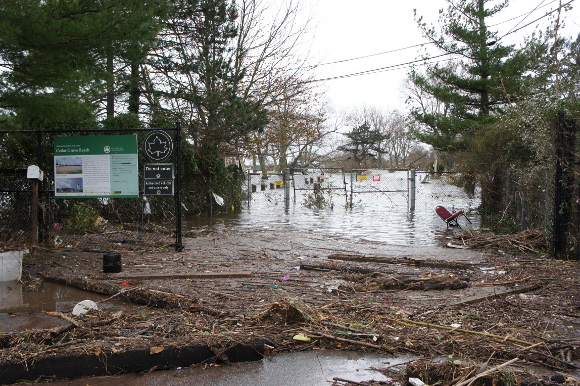 Deep waters make fences
obsolete. The kept out will
keep out—survey new ground
to claim under the guise
of home to defend against
the elements; human or not. 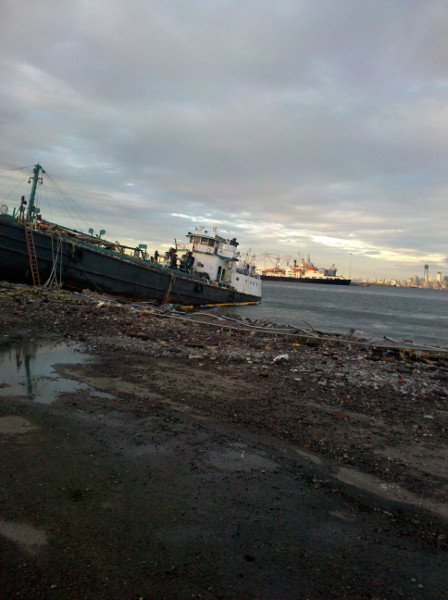 The sea heaved its massive
body on shore in bellows
of salt and debris. With each
exhale, we find ourselves
less sure of reality’s fissured
lines; what goes where. 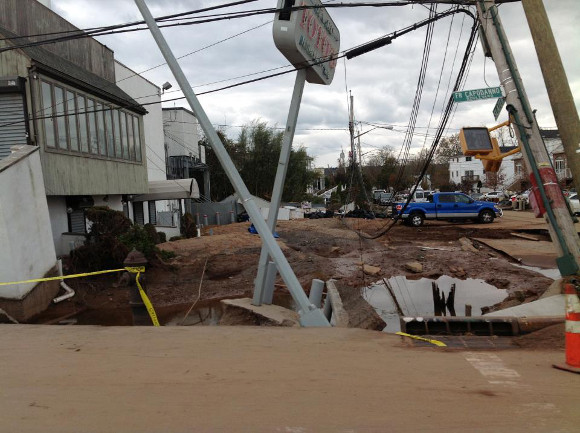 Earth’s mouth, never meant to open,
swallows whole the foundations
you once rested on, trusted to hold
your weight. We shifted with concrete,
bobbed up in gasps to reclaim our bit of air. 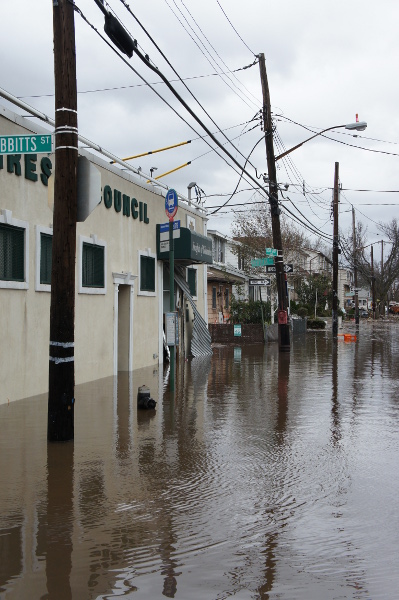 Collision; a force greater than
the sum if its sordid parts.
The would-haves of before
flow into should-haves
of now. Mirror the water’s
deceptive stillness. 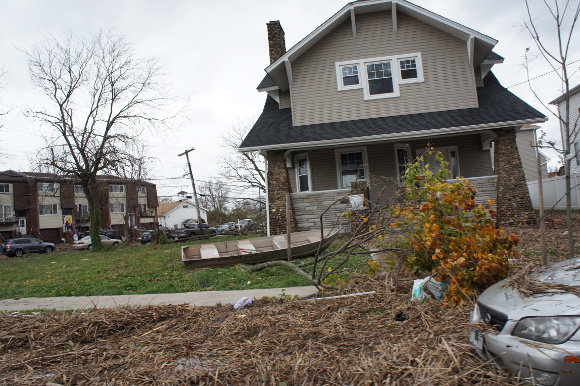 The once segregated meet; less handshake
than embrace, less welcomed than thrust
upon. Strange bedfellows pleading to be
pulled from each other’s clutches. 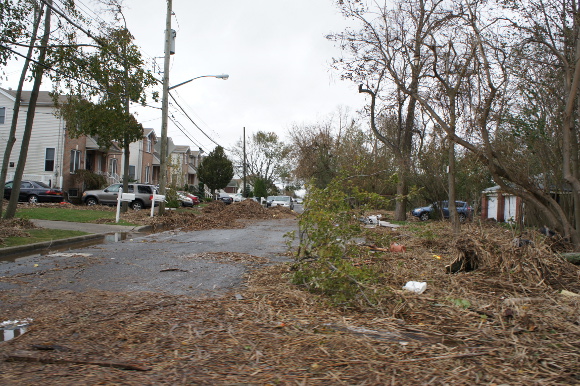 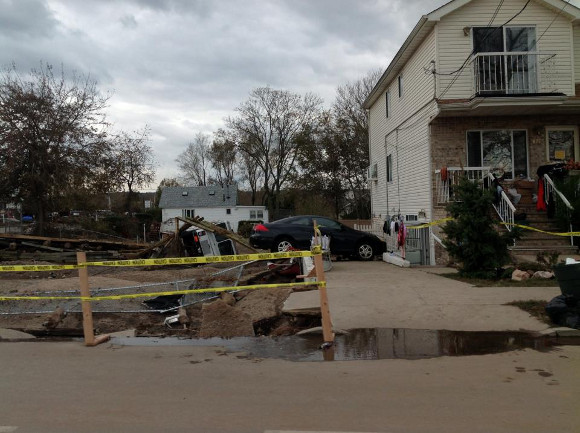 Things are not as you left them.
All the blocks are square,
the holes, round. Dizzied,
disoriented; regain your
composure, open eyes again.
Osmosis is its own converse. 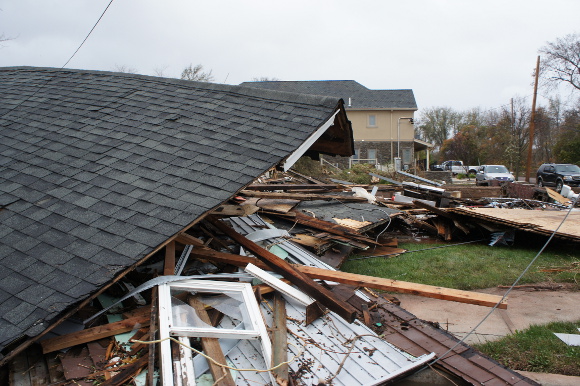 Recognize the debris as your life,
only shattered. Rifle through
for bits to reassemble into a swaying
tower of strewn; symbiosis
of structure and frailty. 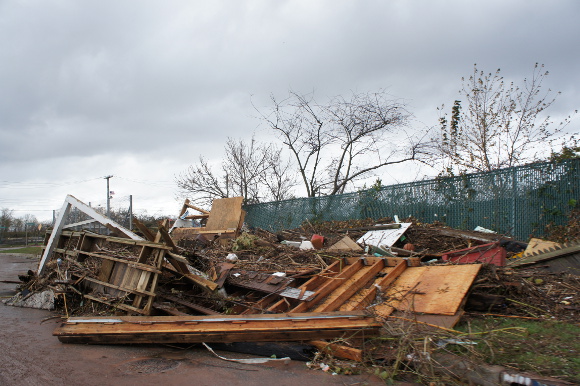 We are exposed. Save modesty
for a simpler time. Sift through
the mounds for mementos. Burn
the rest down to the ground it sought. 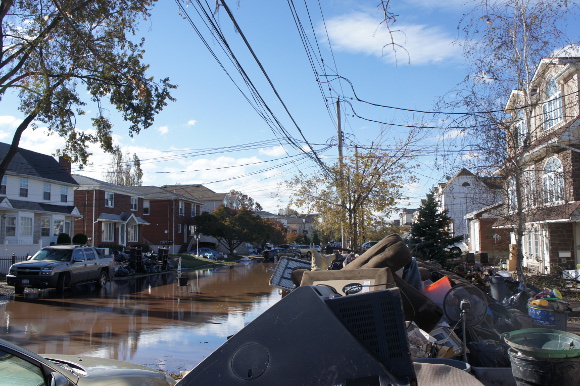 Sifted, sorted, panned for
jewelry in the front yard.
They say waters recede,
but never said you will
be consumed. Sit tight.
Someone will notice,
someone has to notice. 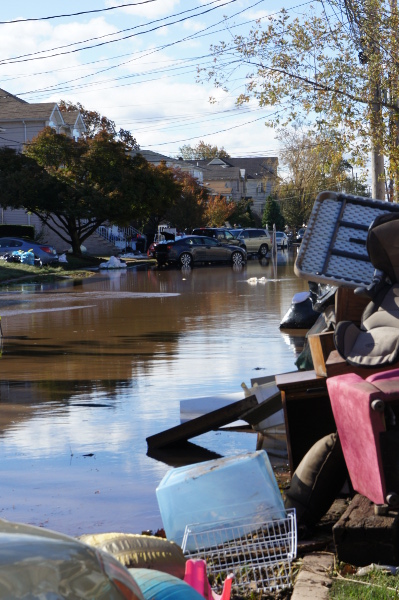 Neighbor’s homes expanded,
pulled up and out to the streets
in perverse greeting. The notion
of privacy: a luxury afforded
to the person who stood outside
the haphazard pile, not in it. 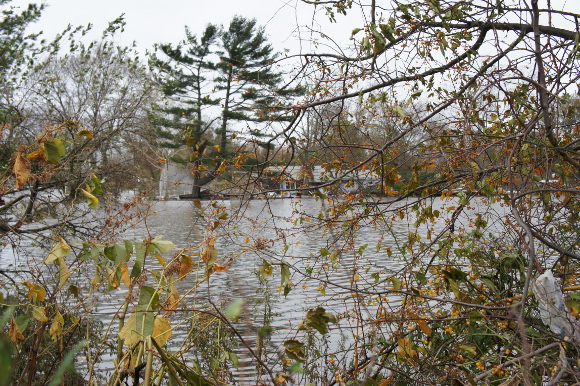 We have our own tides to wade
through, waist deep and climbing.
Water marks on walls will dry—
rub off or be torn down. Our skin
cannot shake the wet, bedding
planes tattooed on your torso. 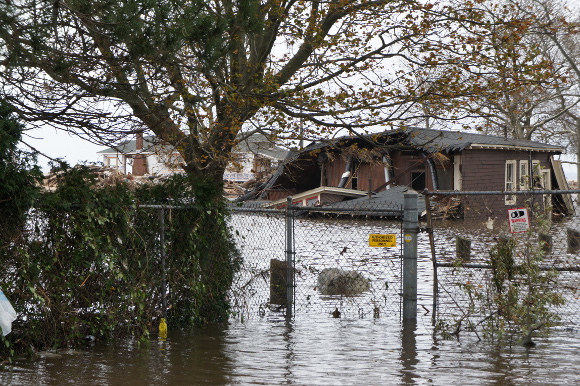 A fresh term for our vocabulary:
Storm Surge. Colloquial will define
it as to be absorbed, to be suddenly
foreign. The new lines drawn
are not to guide, but confuse.

Learn, in these moments,
necessity’s estranged brother:
survival. Calendar swiveled,
leaving us with a new date
to mark time by; that October
night when the heavens
wrung themselves out. 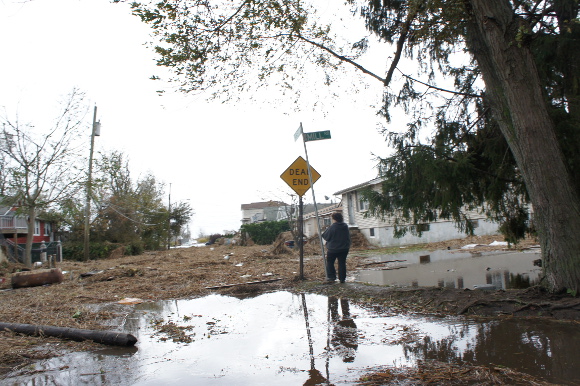 All of our ends, deaded and dull.
There are whispers of the ocean
crawling back, lying in wait
to thrust itself forward again
as a cornered animal. Vice grip
your memories—if their moorings
loosen, you will both be forever
lost at sea. Your lenses are not
scratched, the world is shredded.

Jen Fitzgerald is a community activist, and poet. She is working toward her MFA in poetry at Lesley University. She oversees “The Count” for VIDA: Women in Literary Arts. Her work has appeared in Under Water New York and PBS Newshour.
Tags: Hurricane Sandy, Staten Island, Superstorm Sandy, disaster, photographs, poetry 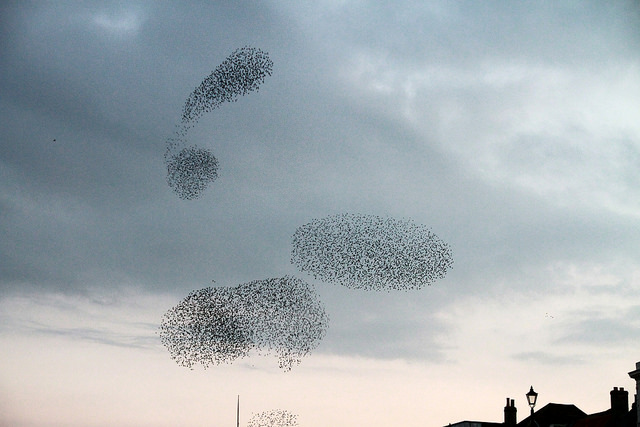 All About the Birds
They might spend most of their days in the sky, / but every evening they remember / to come back to earth.

[how i got that ]
the / tangibility of absence: to put a ruined keep inside of someone / until it becomes skin

A Turtle-Poet Dreams, Given Time: Three Poems by Marjorie Evasco
Perhaps it is now the other way around, / and I have become an almost-perfect lover, / caring little that the Gods love poets less.