A set of wind chimes hangs on a thin board, a short-wave radio emits bursts of Morse code, thin sheets of metal rustle on a crate.

It all began at a screening of the movie “Shanghai Kiss” in the Museum of Chinese in America’s (MOCA) theater. The Filipino actress Ching Valdes-Aran leaned over to the museum’s director of public programs, Nancy Bulalacao, and whispered, “Why don’t we have a museum of our own?”

That was six years ago. Tonight, Bulalacao is welcoming early guests (including me) to the launch event of the Filipino American Museum in Soho’s Third Streaming gallery. Decidedly NOT on “Filipino time,” I’m hoping to steal a moment with the creators of this roving museum.

Bulalacao looks torn between concern and amusement as she watches my reaction,“Are you alright?”

“It’s…not what I expected,” I admit. I was more prepared for artifacts behind glass – perhaps a collection of memorabilia about growing up Filipino in Woodside, cartons of Jollibee circa 1974, yellowed green cards – not a light and sound installation.

The space, lit by lamps attached to wooden blocks, is empty save for curious paraphernalia littering the floor. A set of wind chimes hangs on a thin board, a short-wave radio emits bursts of Morse code, thin sheets of metal rustle on a crate. All these items are connected by wires running like black veins. Each is hooked up to an audio mixer.

The resulting sound is ambient noise punctuated by metallic ringing. Queens-based artist, Stephen Decker, crouches over a sub woofer driver and tosses baoding balls at it, which gives off a sharp ringing that seems to rise, floating above the dissonant fray.

I was more prepared for artifacts behind glass – perhaps a collection of memorabilia about growing up Filipino in Woodside, cartons of Jollibee circa 1974 or yellowed green cards – not a light and sound installation.

Stephen Decker’s “Salvaging the Aether” is a bold choice for the recent launch of the first Filipino American Museum (FAM) in the country, but it’s clear the founders aren’t interested in playing by the rules. Bulalacao and her collaborators are designing a “roving” museum, with pop-up events that move from space to space and form to form.

They don’t even wear nametags. Instead, Nancy Bulalacao wears a brooch of white pearls – to invoke the phrase “Pearl of the Orient”–a sobriquet given to the islands by a Spanish Jesuit in the 1700s. The cluster of tiny white globes identifies her as one of the museum’s founders.

“What we really wanted to do was capture what it is to be Filipino American,” Bulalacao explains. “And we wanted to be fluid about how we did this. I wanted to see how far and wide we could go.”

This month, it’s a light and sound installation. In December, the museum taps into its sociopolitical side with a gathering of Asian American grassroots organizations at the Queens Museum in Flushing. The event will be organized around a discussion of New York City’s Community Safety Act, a legislative package that aims to end discriminatory policing. Bulalacao leans forward with a mischievous grin, next February, she’s determined to host a 7-hour dance party. DJ TBA.

Herb Tam, FAM’s curator, chose Decker precisely because his work is challenging. What Decker is trying to do in the space, Tam explains, is make existing sounds like street intercom transmissions and long distance radio frequencies audible. The gallery, then, is Decker’s concert hall, and he the maestro conducting his wind chimes and disco ball motors into sound signals.

But where is the Filipino American in all this? I ask Tam, squinting at the radio transmitters, as if searching for obvious signs of my country. Balut eggs trapped between the wires, maybe, or some ChocNut wrappers.

“A trap for ethnic specific organizations is that it defines itself instantly,” Tam, who is also the curator and director of exhibitions at MOCA, says. “We wanted a museum launch without a specific statement about what it means to be Filipino American. It resonates because there’s no one conclusion, no one way.” He explains he’s learned through his work at MOCA that having a core exhibition telling a single narrative leaves stories by the wayside.

“Not everyone came to America in a specific way,” he continues, “It’s very fractured among the many generations that have been here. People have different views of what an authentic Filipino American experience is.”

Decker’s piece is left to the viewers’ interpretation. The program for the evening explains that the artist is echoing how Filipino Americans made significant contributions in alternative and science fiction-themed music by re-purposing existing material. For Bulalacao, the work’s representation of chaos resonates. She’s like the little gadgets, a transmitter herself much the way FAM is a cultural transmitter.

For Tam, the different stations of sound-producing modules mimic the islands of an archipelago. Each island makes it own sound and has its own identity, but should be heard as a whole to be understood.

As people begin filtering in, most throw curious looks at Decker, who is spinning a black accordion-like tube to produce a deep, hollow sound. As he flits from station to station, transmitter to chime, creating tall shadows on the white wall behind him, I stand back with everyone else, watching him as he creates his own version of the museum before us.

The recent launch event for the Filipino American Museum included an art installation and sweet rice cakes for guests. Photos by Jonathan Grassi. 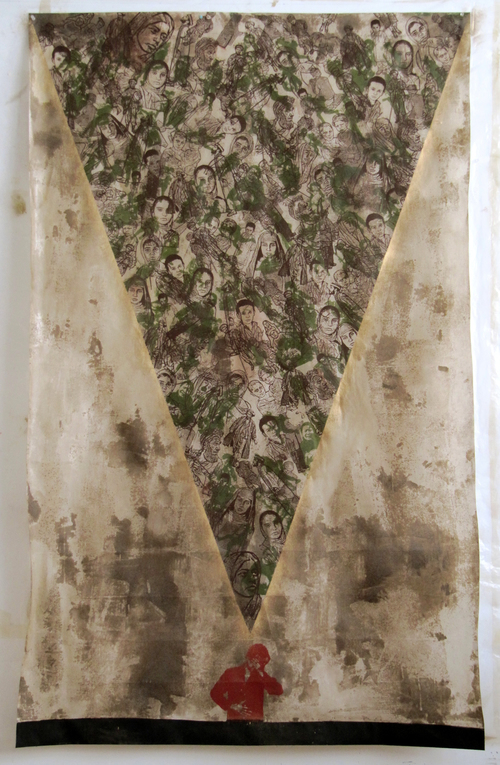 Living in Echo: About the Art
Tomie Arai’s “The Shape of Me”

Video: Behind A Superhero
“We need a new superhero that will not depend on the tropes of past heroes,” says Anand who copyrighted Laserman in 1985 at the age of 12.